Redemption Song is credited to Bob Marley and Edwin Hawkins, but the iconic lines “emancipate yourself from mental slavery… none but ourselves can free our minds” are attributed to civil rights activist Marcus Garvey in 1937. There have been several covers of Redemption Song lately (you probably have to try really hard to make a bad version of this song), but my favorite cover is by Johnny Cash and Joe Strummer.

Other Tot Rockers by Bob Marley: I think this is a gimme. Like The Beatles, Bob Marley has so many very recognizable songs and so many of them  translate easily into a lullaby that potentially every child has heard Three little birds and No woman, no cry by kindergarten. But just in case they haven’t, there you go.

Stuff to think about:

New Republic: Cities need to understand what riots over police brutality are saying.

New York Times: To talk Baltimore with kids, focus on the positive.

Get to know Bob Marley. 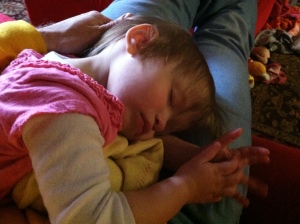 Sometimes this needs to happen. Sleepy Baby music can help.

Sometimes kids (and their adults) need to chill out. You know those times, everyone is just a little bit crispy, and you can tell somebody’s about to lose it. Sleepy baby music isn’t just for lullaby’s, it’s best used when the room needs to chill. It’s too early? Try Sleepy Baby. Need some quiet time in the car? Try sleepy baby. Hangry? Yep, sleepy baby.

Despite it’s many special powers, Sleepy Baby music has been underrepresented on Tot Rockin’ as of late. That’s mainly because as my babes have gotten bigger and like to rock harder. Toddler’s usually prefer to have their music kicked up a notch, but what do they know?  To right this Sleepy Baby wrong, I’m sharing three great sleepy baby songs in one she-bang. Or shhhh-bang, as the case may be.

Last weekend, on our way to “the chicken wing party” aka Wing Fest, my kids fell asleep in the car. To wake them up, I turned on the sleepy baby playlist, to gently nudge them awake. When we arrived at our destination, Wagon Wheel by Old Crow Medicine Show was about half way through. When I turned off the vehicle, TotBoy said, “Can we please listen to the rest of that song?” Yes. Yes we can.

Sleepy Baby songs aren’t generally Molly Gene‘s main thing. But every artist needs a great torch song and this is hers. This traditional folk song has been covered by many, but this One Whoaman Band nails it.

Many sleepy baby songs are about lost love, heartbreak, disappointment. This one is about adultery. Yep, that’s totally okay in the Tot Rock handbook.  The first and last 30 seconds of this video are fantastic.

Sleepy Baby #3: Me and Mrs. Jones by Billy Paul

It’s generally frowned on to give your children whiskey to settle them down, so Sleepy Baby music will have to do.

Does anyone else’s kids have a terrible time with “please”? It’s astonishing to me how often my two well-spoken tots eliminate please from their conversation. TotRock Dad has taken to ignoring the offending kid until they remember to add please. However, that kid usually ends up at the Tantrum City Limits before they remember to add the palabra magica. The whole “what do you say?” prompt really bugs me, and I end up saying it too many times a day. I’m hoping this Tot Rocker will be the answers to my prayers.

A person can really appreciate this live performance because it’s full of strut and shows The Legend of Soul at his finest. However, this studio version is a better example of the power of the song itself. The studio version also does a better job of addressing the “please” agenda.

Kind: sleepy baby. There aren’t many sleepy baby songs in the James Brown catalog, but that’s not because he can’t stick it.

Other Tot Rockers by James Brown: Get on the Good Foot (awake baby), Get up offa that thing (awake baby)

Even without a “please” it takes a lot of will power to say “no” to this mug.

To be honest, I started writing this post several weeks ago and then I didn’t publish it. With all the recent spotlight on celebrities and domestic violence and James Brown’s notorious history as a perpetrator, I felt conflicted. Fortuna smiled on me, and I happened to listen to a recent Sound Opinions on the same subject. Jim and Greg do a much better job explaining the controversy in the context of James Brown and other music celebrities, much better than I could do. Please check out the Sound Opinions podcast and this article by Jim DeRogatis about R.Kelly.

What’s your favorite Tot Rocker about being polite? Please, will you tell me?

Sometimes music falls out of your life and then you are reminded of it all over again. That’s what recently happened to me with regards to Soul Coughing’s Janine. Until recently, it hasn’t been in the Tot Rock rotation. It’s great to be reminded of the music of your past; and it’s an especially great song that transcends memories and become something new to you.

Anyway, Janine by Soul Coughing is the precious Tot Rocker #22:

Not exactly the Baltic Sea.

Mike Doughty has a great way of making a gal wish he was singing about her. I mean isn’t the line, “if you were the baltic sea and I were a cup” just about the most gorgeous thing that has ever been said?

Requirements: Janine is a snap for a sing-along, and it can be personalized to fit your fancy, “Etta, I drink you up”. And all importantly, it’s a great song.

Get to know Mike Doughty.

“Mama be alright, you ain’t gotta be my friend tonight. Mama be okay, you would probably bore me anyway.”

Okay, that’s not exactly the lyrics to Brother Ali’s Forest Whitiker, but it’s close. Thankfully, toddlers don’t have much use for proper grammar, they just seem to perk up if a song includes their name or the name of someone they know.

Reasons it’s a Tot Rocker: Having good use of onomatopoeia, simple melody and a repetitive chorus, make this a solid Tot Rocker. While it’s not a prerequisite for a Tot Rocker, Forest Whitiker is good because it also has a good message. It talks about setting aside ideas of beauty and worries about what others think and just being okay with yourself. I don’t care who you are, sometimes it’s hard to live by those words of wisdom.

Stuff about Forest Whitiker: There are several places on the interweb (here and here) that attempt to explain the lyrics to this song. Normally, explaining lyrics is not my thing. However, there are a couple things specific to this song that neither of these explanations seem to cover: the bible reference and the title. Firstly, there’s that whole “would you please turn in your bible, to the third chapter of the third line…” it looks like these other bloggers just assume that’s some made up stuff, ie. a fictional book called Beauty Tips According to Forest Whitiker.  I decided to look into it a teensy bit. Here’s what I found in the Quran from the third chapter, the third line:

He has revealed to you the Book with truth, verifying that which is before it, and He revealed the Tavrat (torah) and the Injeel (gospel) aforetime, a guidance for the people, and He sent the Furqan (def: furqan. another name for quran “it separates the truth from fallacy and licit from illicit thoroughly”).

Hmmm. Maybe? Just in case, I checked the Torah and the New Testament too, but no obvious and enlightening easter egg to be found. Or is there? I’d love to hear what you think. Actually I’d love to here what Brother Ali thinks, but you’ll serve as a good stunt double.

Stuff about Forest Whitaker: The inspiration, or at least the likely namesake of the song, Forest Whitaker, is an actor, has a black belt in karate, went to college on a football scholarship and graduated from USC majoring in music. Quite the renaissance man, if I do say so. Don’t believe me? Check it out (here and here) for yourself. However, those facts aren’t probably why Brother Ali wrote this song about FW. It might have more to do with his (until recently) larger girth, and his physical condition, called ptosis- where the muscles in the eyelid are not strong enough to lift properly. What does Mr. Whitaker have to say about it?

“My eye? It’s a genetic thing. My dad had it and now I have it. You know, I just found out that it may be correctable a little bit, because it does impair my vision. When I look up, I lose sight in this eye. I think maybe for other people, it informs the way they see me. But I don’t really think about this eye, other than the times people talk about it, or when people take photographs of me sometimes they might say stuff about it. I don’t think it makes me look bad or anything. It just is.” (imdb.com)

FW has acted in some iconic films, including Platoon, The Last King of Scotland, Ghost Dog; the Way of the Samuari, and too many others to recount here.

In the midst of all those film credits however, you may have forgotten one of his early roles:

On Tour NOW! Are you up for a road trip? See Brother Ali in front of his hometown crowd at the iconic First Ave (Minneapolis) on Sunday, May 25th. Get to know Brother Ali. Make Friends with Brother Ali. Listen to Forest Whitiker.

Go ahead- add your Tot’s name to a song- I’m certain the song will become an instant favorite. And if you happen to know Brother Ali, ask him if he is referencing an actual verse with that whole third book, third line business- I’m still super curious.